The Hounding of Jeremy Corbyn

24th June; David Cameron came out of No. 10 and with a tear in his eye resigned as Prime Minister.

Since then the UK has gone into an extraordinary vortex of fire and brimstone meltdown. The man at the forefront of the leave campaign Boris Johnson has fallen on his sword in the realisation that all the lies he proffered are impossible to fulfil. A bunch of frankly unpleasant, untrustworthy, unlikeable individuals have come out wanting David’s job. No matter whether they have caused unending hardship for foreign students trying to study here (May), have claimed that homosexuality is ‘curable’ (Crabb), have caused teachers up and down the land to feel completely hopeless in the face of cuts and expectations (Gove), or have been involved in the same lies Boris fell on his sword for (again Gove) and albeit very smiley (Leadsom) or are just bland (Fox) forgettables.

And if you were the opposition wouldn’t you think this was the exact time to take down the Tories – to really make your mark, to let them have it with all barrels? To make headlines with how you would handle all the UK’s troubles? Yeah, most would however … Labour appeared to have other ideas.
It’s not just the labour MPs who have said they want Jeremy Corbyn out, Mr Cameron spat it out at the despatch box on Wednesday, councillors have asked him to resign, and the mainstream media / newspapers have gone completely mad.  Yet something doesn’t smell quite right. Have a look at their comments since Brexit – unbiased? 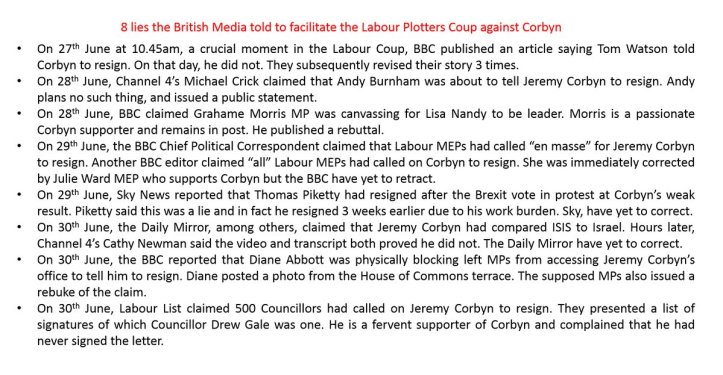 They have also admitted they had the knife out during his election for leader last year – did it seem odd to anyone else that Panorama only did an exposé on Mr Corbyn but none of the other contenders?

“Jeremy is up and down the  country pursuing an itinerary that would make a 25-year-old tired, he has not stopped. We are doing our best, but if we are not reported, it is very difficult.”  13th June 2016  Angela Eagle

“I was devastated by the result of the EU referendum. Too many of our supporters were taken in by right-wing arguments and I believe this happened, in part, because under your leadership the case to remain in the EU was made with half-hearted ambivalence rather than full-throated clarity”

Taking a look at some the headlines around Jeremy Corbyn is really quite extraordinary and rather unsettling. Does all this harassment, abuse, bullying indicate he’s not a leader or does it indicate something else? 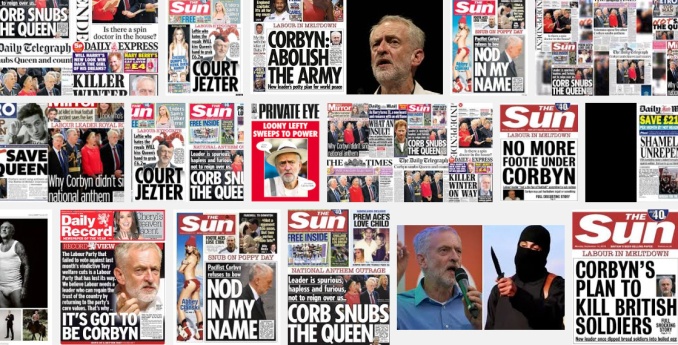 How a man who is apparently completely impotent, not able to lead, not able to bring a group together, who strangely couldn’t have worked harder campaigning for remain according to Angela Eagle a few days earlier, and then didn’t do enough to help the remain camp, and is also a bully, either this is a man of many personalities – possibly some medical disorder OR something else is at work here.

Last Saturday plastered over the TV evening news, over social media and in the papers was a little phone video clip of a supposedly disgruntled labour supporter who pestered Corbyn at the Gay pride march demanding that he resign.  Strangely within minutes of it being taken it appeared on the major news outlets (just as any little phone video clip either you or I would take ;-).  What is a lot more disquieting is when you trace back who the man was (Tom Mauchline) who he works for (Portland Communication) and who he works with and hey presto Alistair Campbell pops up again. How very timely, what are we waiting for? Oh yes some little unimportant report.

After 6 years, at a cost of £10.3 million and covering 2.6 million words the Chilcot report will finally be published on the 6th July.  While it’s doubtful that anyone expects Tony Blair to be outright accused of wrong doing in it, there must be some worries as to what it will include.

Jeremy Corbyn is on record as saying the former prime minister could be made to stand trial for war crimes, that he thought the Iraq War was an illegal war and further Mr Blair “has to explain that”. He also said  “We went into a war that was catastrophic, that was illegal, that cost us a lot of money, that lost a lot of lives. The consequences are still played out with migrant deaths in the Mediterranean, refugees all over the region.”

The big coup against Corbyn was called last Sunday, mass resignations Monday (timing and staged with the precision of top class choreography), and yet where is the leadership challenge? it seems to have faded away? Angela Eagle? With her voting record of voting for the Iraq War, bombing Syria, Trident, more integration in the EU, against an investigation into the Iraq war,  (Source They Work For You) and next Wednesday the report will be published.

So, yes it smells like dark forces are at work. And maybe they are, but how much further are they going to stoop? History tells us these things don’t end well.

Does no one else seem a similarity to what happened to Princess Diana, the tragedy of hounding an individual to their end? Were no lessons really learned?

One can only hope that Jeremy Corbyn can hold his nerve, can see all this despicable game playing for what it really is, and just hold on in there, because whatever you think of the man, whether you think he is leader material or not, whether you believe him to be electable or not, at the end of the day, he is just a man, and has as fragile a hold on life as the rest of us.

I really appreciate your visit. I’d love to hear your comments if you have any. Have a lovely day ;-)